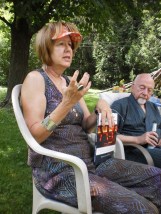 Sheila Ross invited us to use her wonderful garden/back yard for our potluck/summer meeting. There was so much going on in that meeting, the afternoon flew by without us sharing our own haiku. Guy gave us verses written on strips of paper, asked us whether each was a haiku or not. Lots of learning going on there. Terry Ann launched her Global Lanterns book, and I introduced a board game called Genji, which was about early tanka of the Heian period. Our special guests were Rich and ZoAnn Schnell, who live in Plattsburgh, and who organized the Haiku International conference there in 2008. Guy then presented Terry Ann with a bolt of special silk from which Sumo wrestlers have special kimonos made. He also gave her a beautiful wrap-around ‘belt’ for it; Terry wore it at HNA a few months later when she gave her presentation on the history of haiku in Canada. It was a full day in more ways than one. We’ll have to talk, as a group, about where to hold our next summer meeting.